Something delicious often comes forward when you believe, at first, that you have nothing.

The core inspiration behind this breakfast is mimicking chilaquiles, which is an ingenious way to dispose of stale tortillas, but I just used the same idea and applied it to what I had lying around that day, which happened to be bread. Lots and lots of bread.

We can’t consume as much of Nate’s bread as we’d like to, and unfortunately some of it does seem to “go to waste,” but I’m crafty and have found ways to still turn it into something delicious (here’s another good recipe for this quandary). One morning I was feeling especially lazy and didn’t feel like going to the store to get ingredients. On the counter was some stale bread cubes that Nate had prepped to turn into breadcrumbs when the time came, but I decided to take a risk because, guys, I was, like, really, really hungry. I made a quick salsa in my blender using ingredients that I had on hand, and then I fried the bread before adding the salsa to it. I added an egg for protein, then I just threw some cheese and green onion on top because that’s all we had at the time.

The result took me by surprise. I expected it to be fine and get me through the morning, but it was far more than that. It was a collection of complex and satisfying textures; the bread had sopped up some of the salsa but had remained soft and fluffy while the parts that had been fried were delightfully crispy.  The salsa was also surprisingly good for something that I had just thrown together, and the leftovers of it found it’s way into many other meals throughout the week. It was so satisfying that I insisted on making it for Nate one weekend. He was dubious at first, but it too surprised him with its deliciousness. It’s such a good and easy breakfast for us that it’s made its way into our normal weekend rotation.

Make the salsa by adding the tomatoes, garlic, onion, chipotles with adobo sauce, vinegar, and oil into a blender and pulse until it becomes smooth. Add salt to taste, then set aside.

Preheat a nonstick skillet on medium heat, then add the oil. The oil should shimmer in the pan before adding the bread. If you’re uncertain if your pan is hot enough, add one of the bread cubes to it and see if it sizzles. If it doesn’t sizzle immediately, it isn’t hot enough. Remove the cube and wait for it to get hotter. If your oil isn’t hot enough, your bread will soak it all up and your scramble will be heavy and soggy. Nobody wants a soggy scramble. Nobody.

When your pan is hot enough, add the bread and let it crisp up in the oil, flipping them over to other sides when they get golden brown. I’d recommend using tongs to flip your cubes. I like to make sure that my cubes have at least two or three sides that are crisp and golden before moving forward. 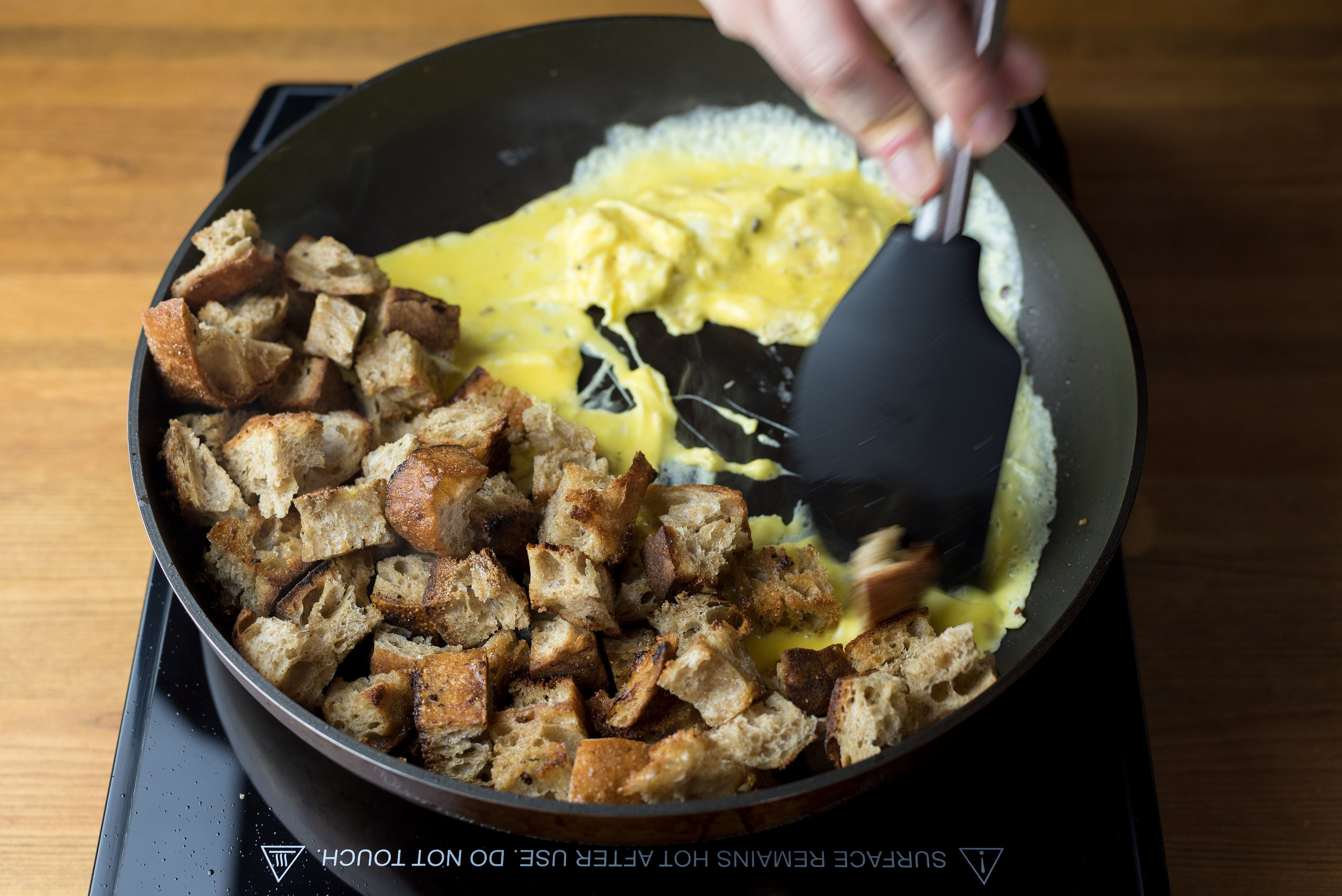 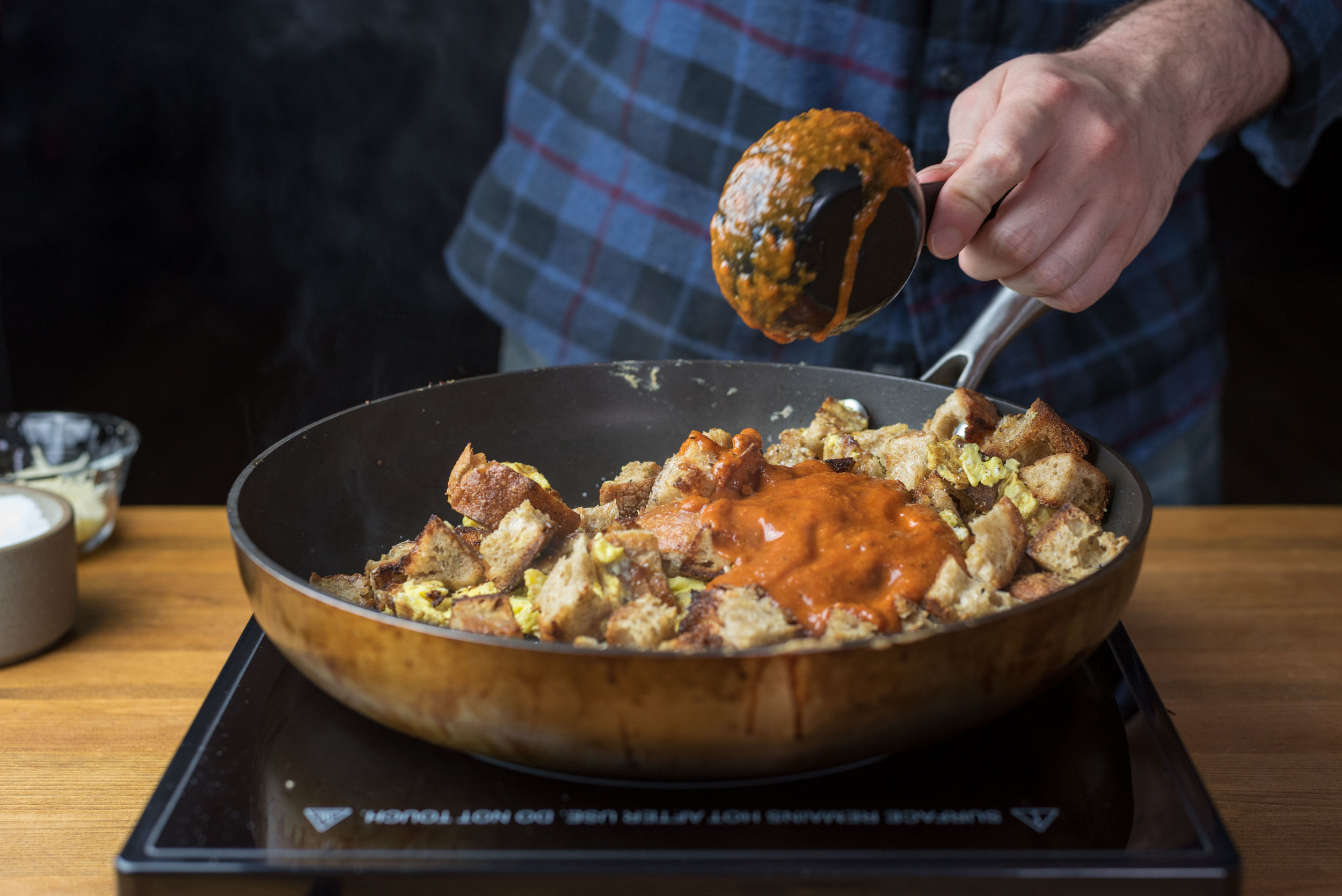 Move your cubes to one side of the pan, leaving half of your cooking space exposed. Add the beaten eggs to the pan and move them around cooking them quickly. When they are scrambled (a little underdone is preferred), incorporate them among your bread cubes, then add the salsa. Remove pan from heat immediately and keep stirring to coat the bread with salsa.

While your scramble is cooling and thickening up, add the cheese and a big pinch of salt. Then stir it together, making sure the cheese is incorporated and melting. Serve immediately with the thinly sliced green onion garnished on top.