Sometimes our cravings are confusing.

I want iced coffee! In December.

I want a big bowl of steaming hot ramen! In July.

I want ice cream! For breakfast.

I want breakfast! At fucking midnight.

Our cravings are never wrong, but sometimes they don’t give you the whole picture of what you truly want. Maybe there’s something entirely new that satisfies the craving that you never knew you had in the first place, and sometimes you have to create that entirely new thing yourself. We learned this recently when we had a craving for pho in the summer.

Pho is amazing; it’s a beautiful, beautiful thing, and one day when Portland was flirting with triple digit heat we decided, for some idiotic reason, that it was the most delicious sounding thing to eat. However, there’s one problem with that: the broth.

Imagine, if you will, being overheated, sweaty, and hiding away in your small apartment, not unlike a miserable long haired cat taking refuge underneath a car from the sun, all in vain. Now that you’re good and uncomfortable with that image in your mind, think about pounding a bucket of steaming hot, spicy, aromatic beef broth. Sound good?

And yet, it was what we wanted. If only we could get rid of the broth element, we thought, dinner could be perfect. So, I tinkered, I toyed, and I triumphed: brothless pho was born.

Grind your own spices for this one and store the blend in the freezer if you don’t use it immediately. I’m sure there are pho spice blends out there that you can buy to make this, and I’m sure that your noodles would turn out fine if that’s the route you choose to take, but taking the time to do this step elevates the dish so much. It makes that pho flavor you’re seeking so much more vivid and delicious. It’s familiar enough to be comforting, strange enough to be exciting, and easy enough to be a weeknight dinner all at once.

Make the pho spice blend by toasting all the spices in a small pan on medium to medium high heat. Swirl them around in the pan to encourage even toasting and remove them from the heat once you begin to see some browning and the spices start to become heady and aromatic. Transfer the spices to a device that can grind them into a fine powder; our preferred gadget is a coffee grinder dedicated to spices. Blend until fine and use immediately. Store the excess in an airtight container in the freezer.

Prepare your rice noodles by soaking them in water. If your noodles are really thin, use cold water. If they are thicker, use hot water. Allow them to sit for about 20 minutes or until they are very pliable, but not cooked through. If you’re using warmer water to hydrate your noodles and they finish softening up before you’re ready to use them, just strain them out, dump out the warm water and refill the vessel they were sitting in with cold water and put them back in. The cold water will halt the softening process while simultaneously preventing them from sticking together; just fish them out again when you’re ready to use them. Strain your noodles, making sure to shake them a few times in the strainer to get as much water out as you can and set them aside the moment you’re ready to start cooking. 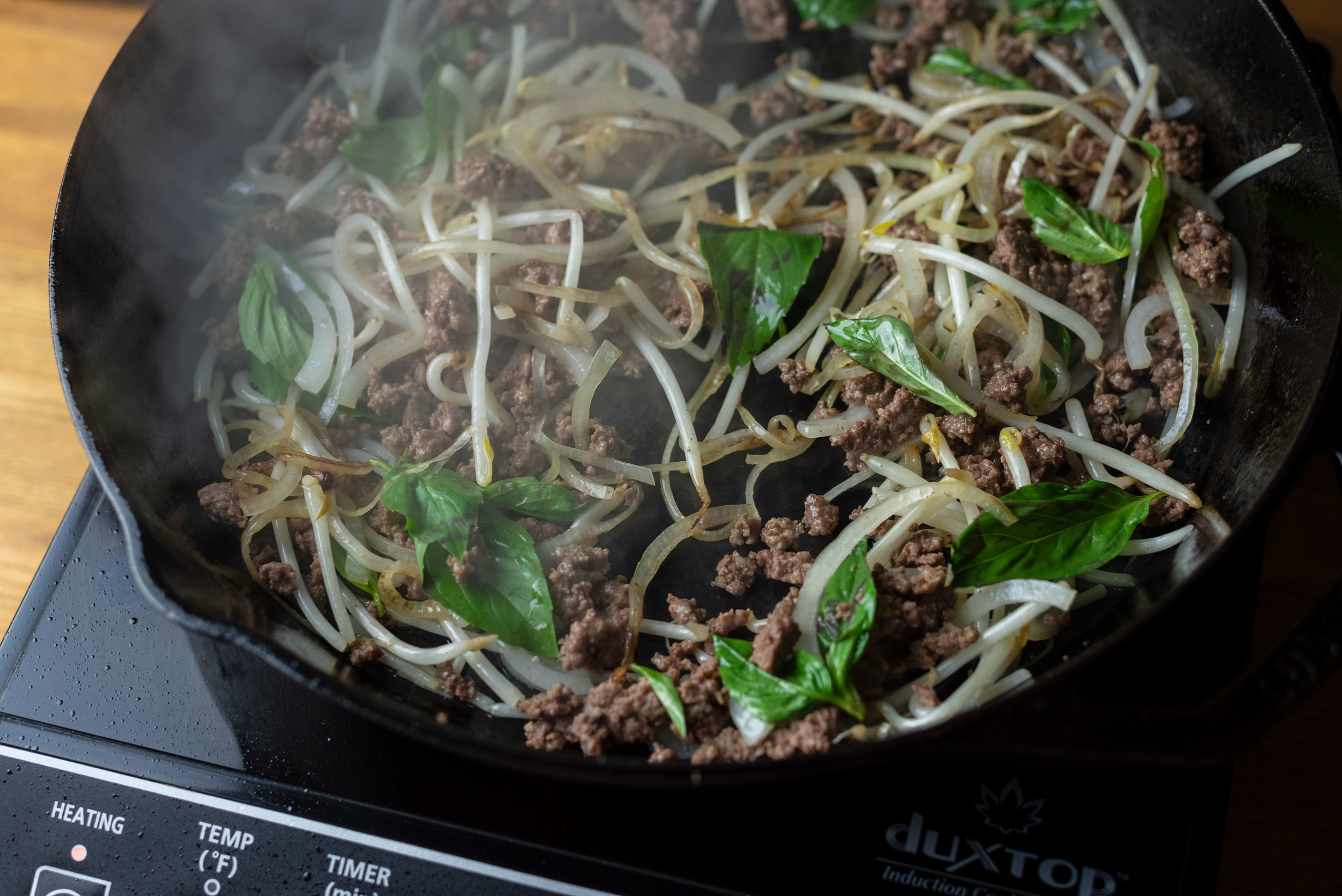 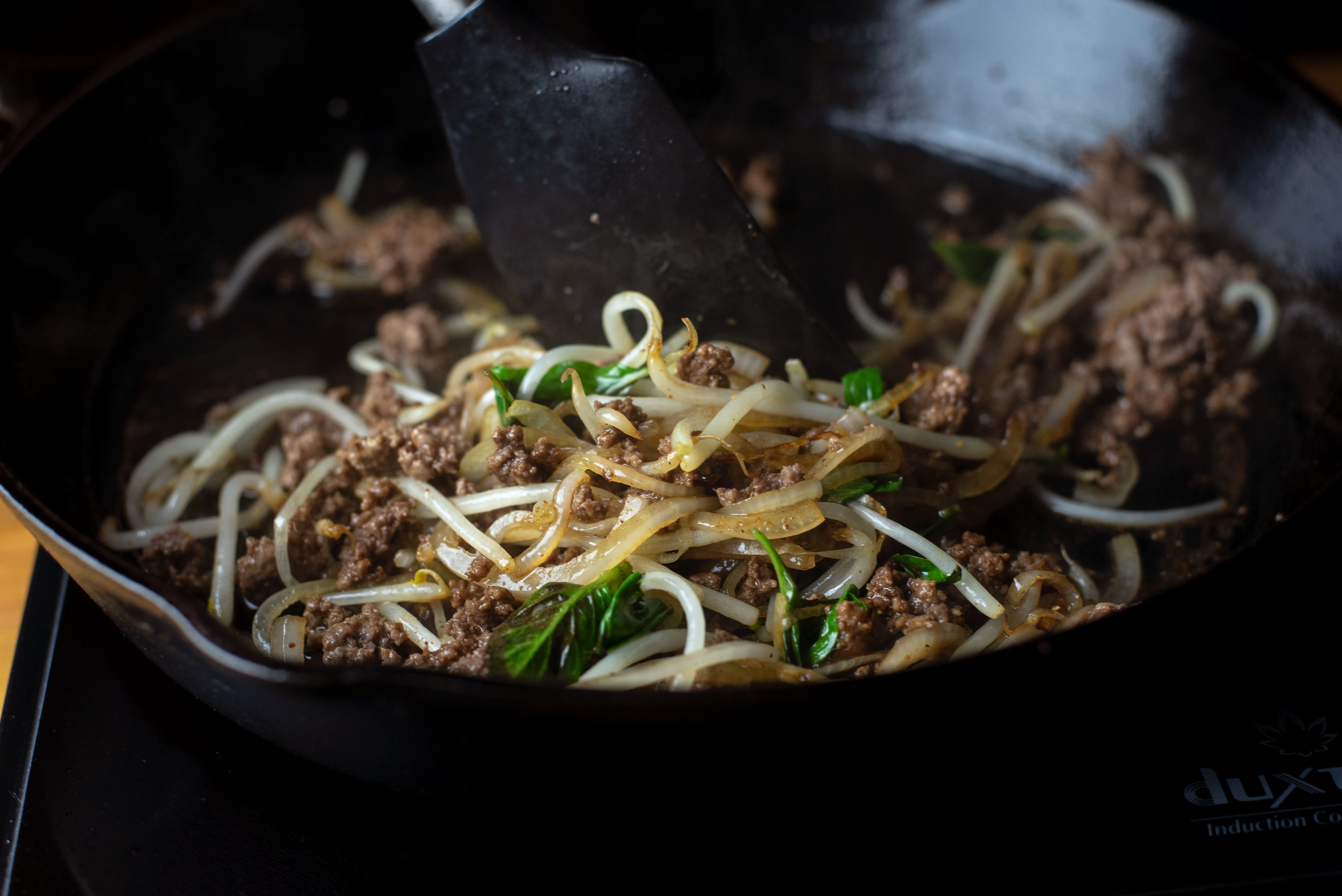 Bring a wok or skillet (cast iron is preferable) to medium heat and add in your oil, swirling it around the surface of the pan. Add the beef to the pan, making sure to separate it into lots of smaller pieces, and cook until the meat is no longer pink. Add the onions and give everything a quick stir. Once the heat from the pan starts to singe the onions a little, caramelizing them slightly, add the bean sprouts and holy basil. Cook the mixture for about 30 second or so, until the bean sprouts soften slightly.

Move everything in your pan over to one side, exposing about one half of the surface of your pan, then remove your pan from the heat and add the sauce to the naked side. The sauce will bubble profusely and reduce very rapidly, so keep and eye on it until it reduces by about half (this ought to happen in seconds). The inherited heat in your pan should be enough to reduce your sauce, but if it needs just a little more heat, put everything back on the stove and finish up the reducing process; just be sure to take your pan back off the heat when you’re finished. Once done reducing, toss in your rice noodles and mix them until everything is evenly coated and the ingredients are well dispersed, then serve immediately. Garnish with chopped cilantro, a lime wedge, and your desired amount of jalapeño or chili paste.