There’s not a lot to say about this recipe other than that whenever we have gnocchi in the freezer, this is usually the sauce we pair it with. From start to finish, this sauce is ready in about 10 minutes. We’ve made it countless times for ourselves, and several times for company. One time, we even had someone inform us that they could drink the sauce straight; so if you want a little insight into how good this recipe is, think about that. But, please, just think about it.

If you’re cooking this for more than just yourself, resist the temptation to make more than one batch of this recipe at a time. Once you’ve got your water boiling and your pan hot enough, you’ll be able to knock out all the servings super quick, I promise. Plus, who wants to count gnocchi individually for a large group of people and extract them from a pan filled with sauce? That’s just annoying. And portioning a sauce this good by eyeballing? Forget it. That just leads to animosity and possible passive aggressive behavior if someone gets less sauce than someone else. It’s a great way to lose friends.

Side note: if you’re serving your gnocchi with some kind of protein (like seared chicken breast, for instance) we highly recommend that you begin the cooking process by deglazing with the leftover drippings in the pan. The sauce is already pretty deep in flavor, but this little step just pushes it over the edge. You’re also welcome to add a little bit of chicken broth, or even the leftover water from boiling the gnocchi, to the sauce to lengthen it out if it starts to get too thick. If you’re purposefully making this vegetarian and you wanna use a stock, I’d swap out chicken stock for a hearty mushroom stock if you have it; go full-on umami bomb, you know you want to. 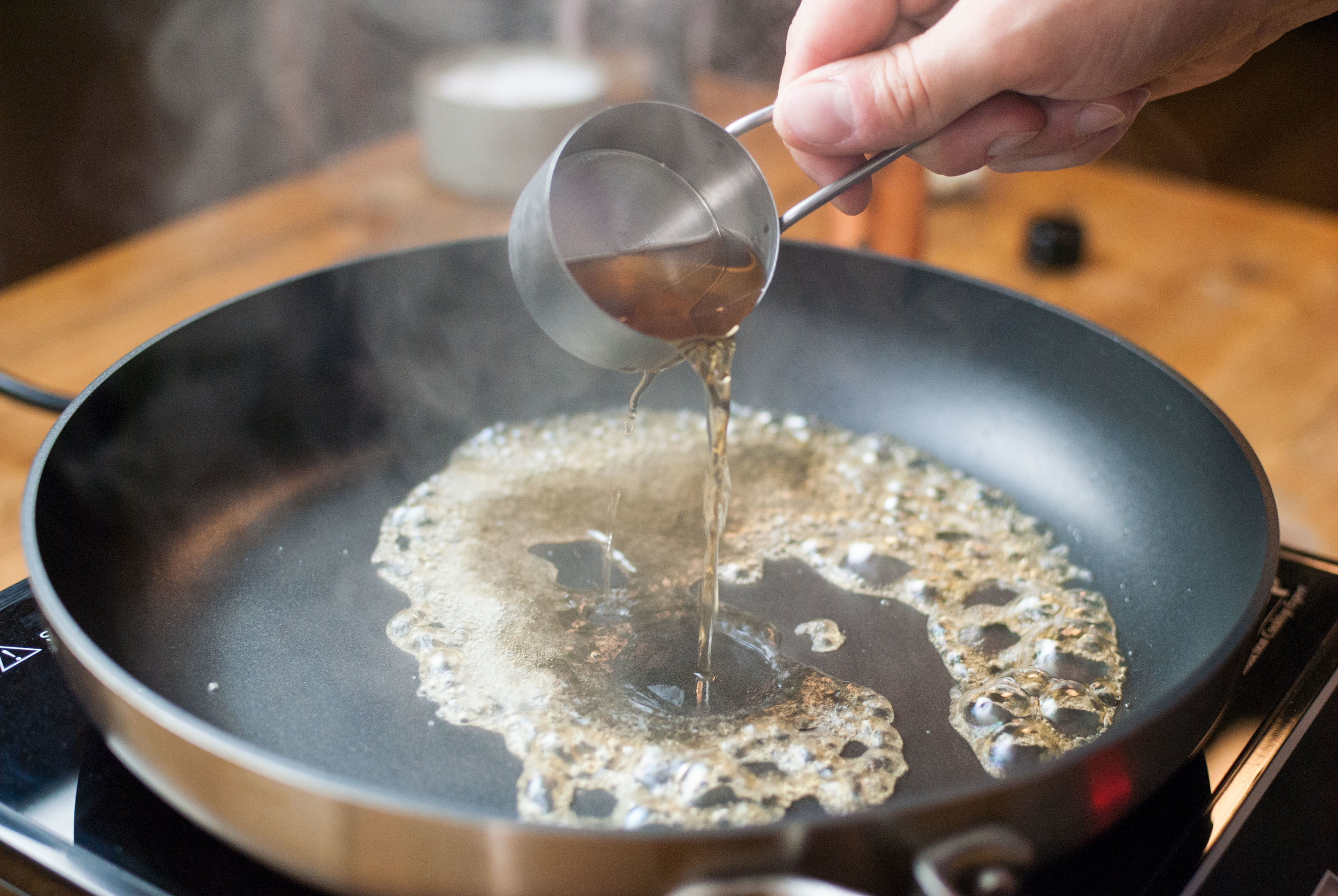 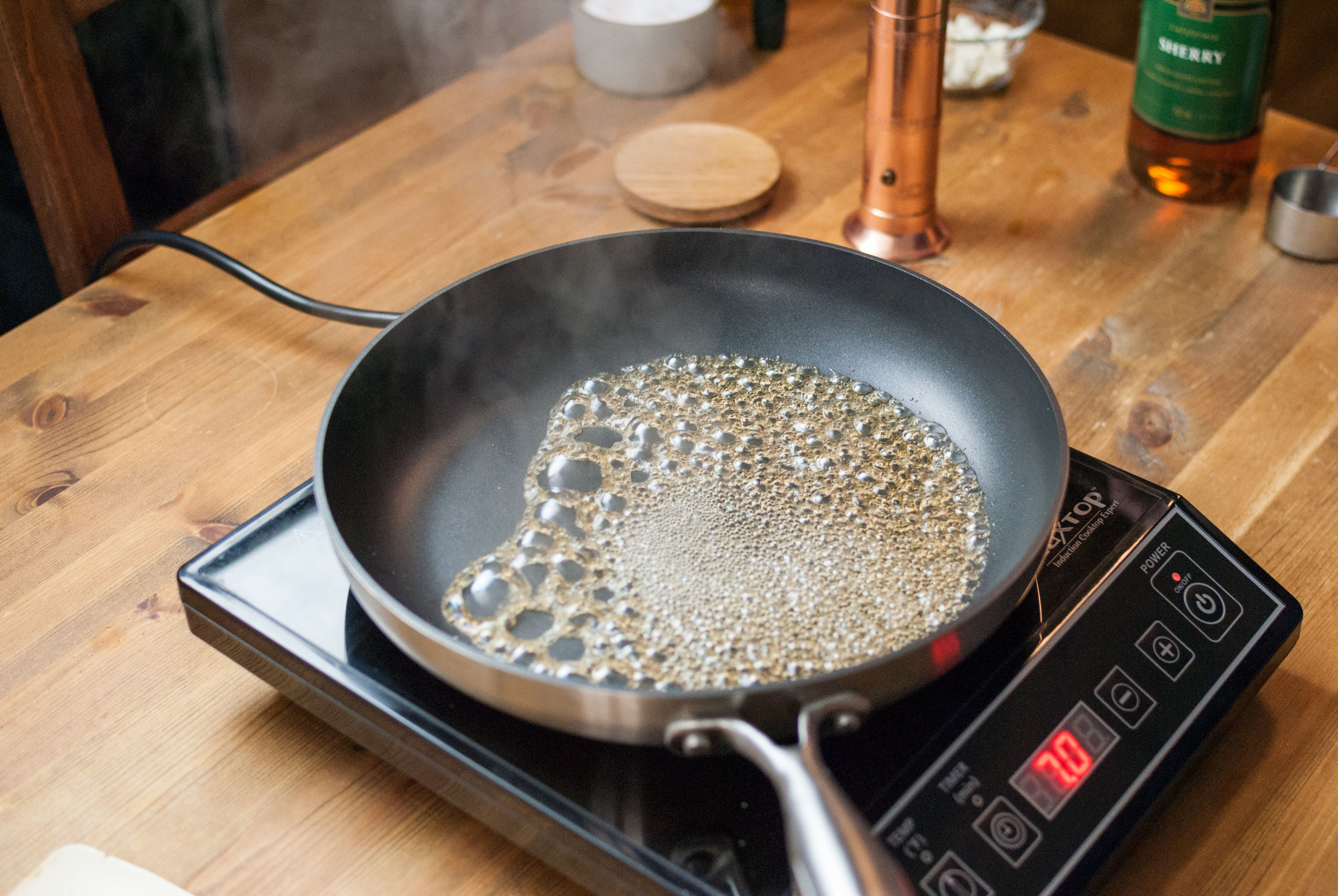 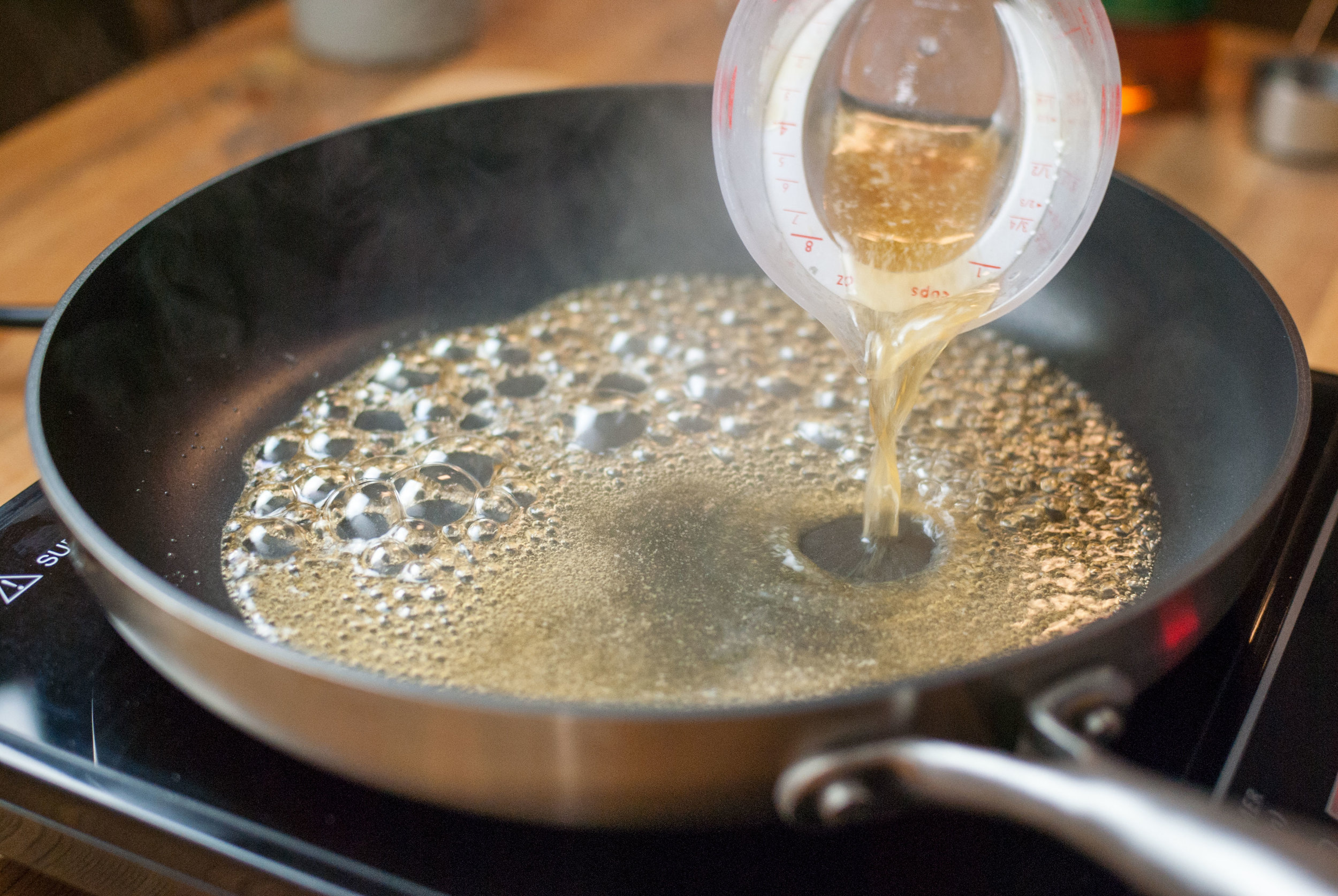 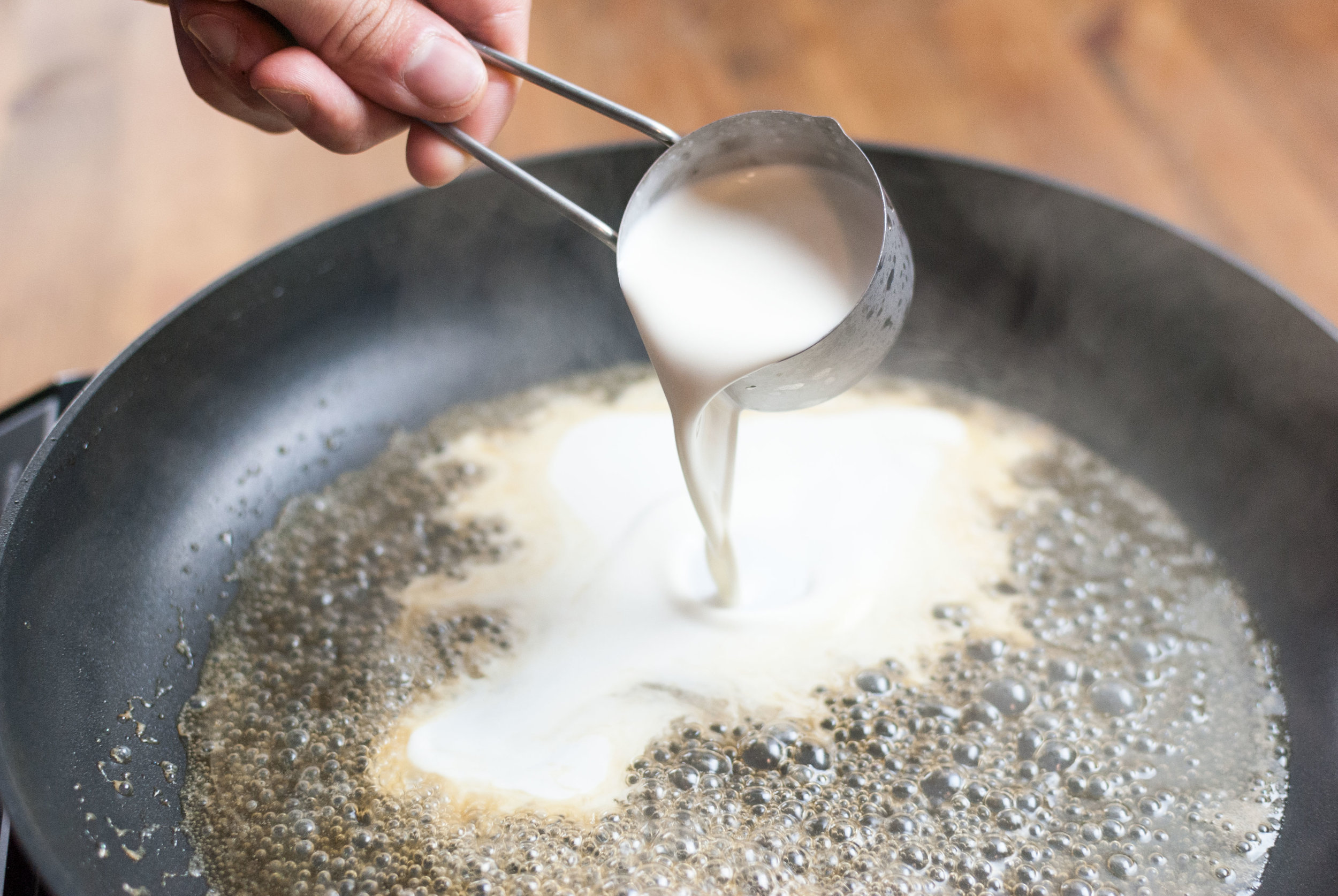 Bring water to a boil in a pot large enough to hold all your gnocchi. Heat a medium sized skillet to medium heat and keep them on standby until all your ingredients are ready to be used rapidly in succession. The water should be a rolling boil (especially if you’re using frozen gnocchi) and the pan should be able to sizzle away a little bit of water instantly. If you’ve seared off protein for this meal in advance in your skillet, please please please do not clean it before making the sauce. Use all that goodness for your gnocchi. 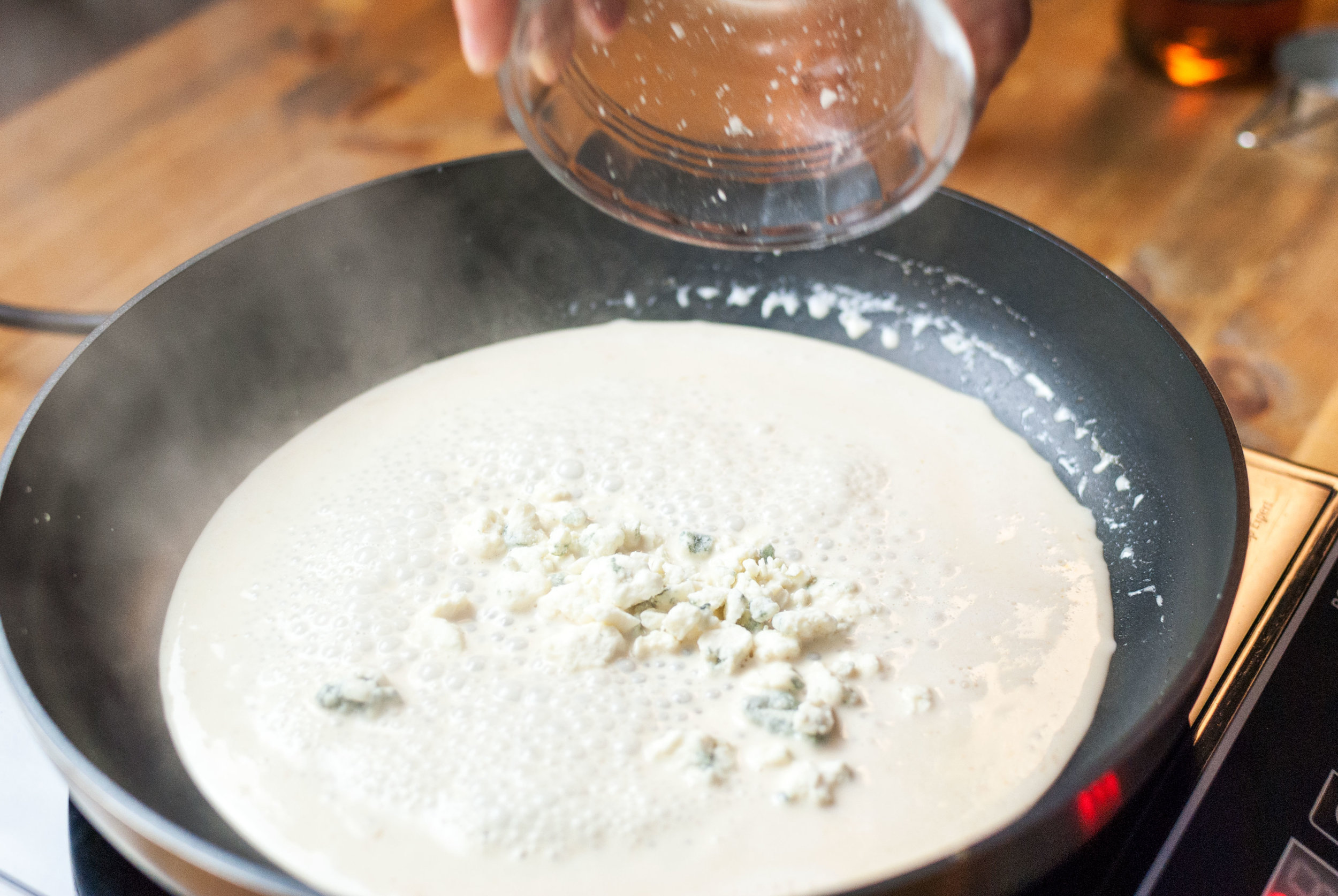 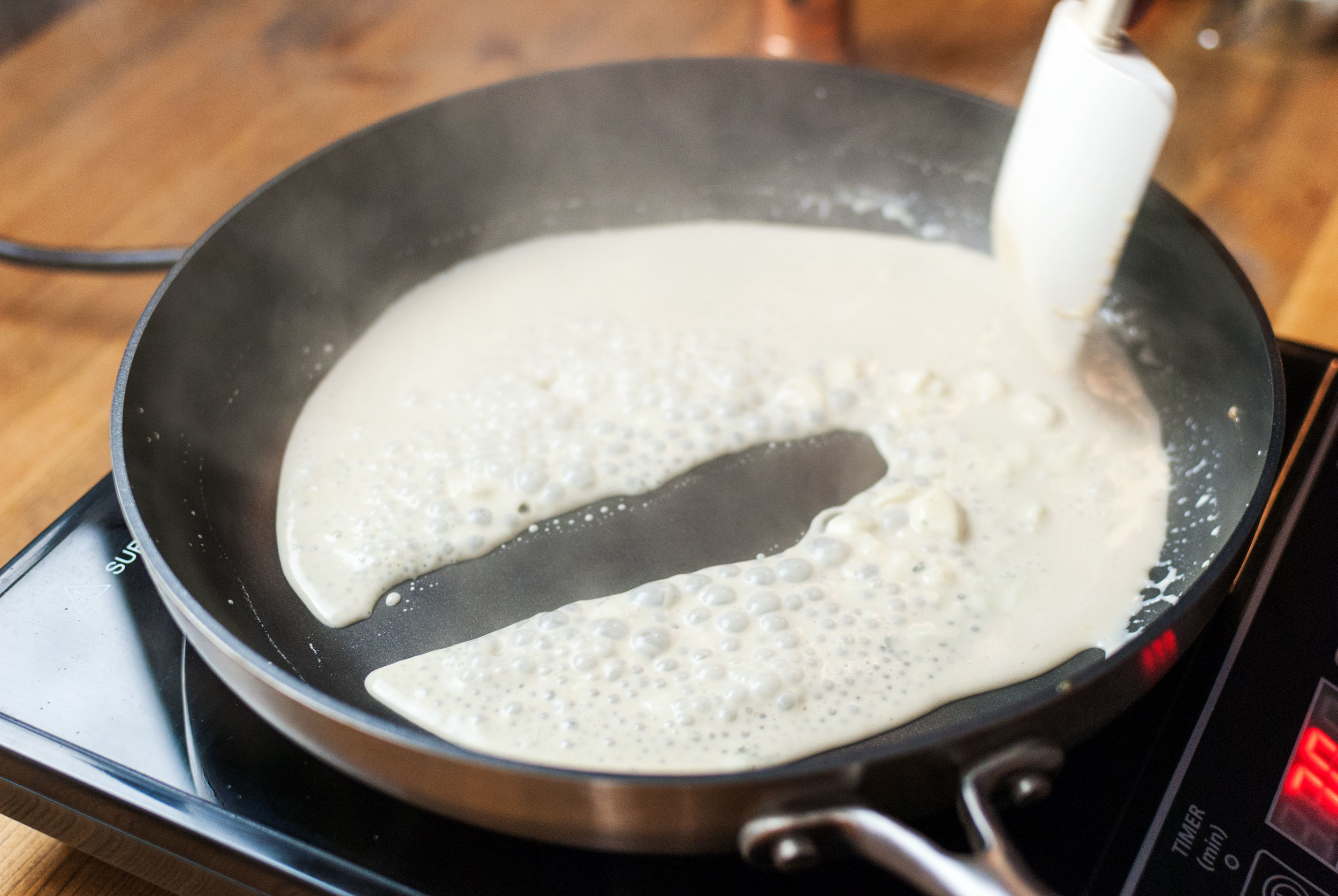 When you’re good to go, throw your gnocchi into the boiling water. If you’re using freshly made gnocchi, they should be done cooking in a couple of minutes. If you’re using frozen, they’ll take a bit longer, maybe five or so. Just keep an eye on your gnocchs; a tell-tale sign that they’re done is when they float to the surface of the water. Don’t freak out if they’re done before it’s time to transfer them to your skillet. Gnocchi are pretty forgiving, so you can let them hang out in the water for a bit longer until you’re ready for them.  At the same moment when you start boiling your gnocchs, add the sherry to your pre-heated skillet. The sherry should reduce by half-ish in 10-15 seconds, and if you’re deglazing, be sure to scrape off all the tasty bits from the bottom of the pan. Add the cream and gorgonzola to the skillet and move them around to push the sherry and cream together, as well as encourage the cheese to melt. 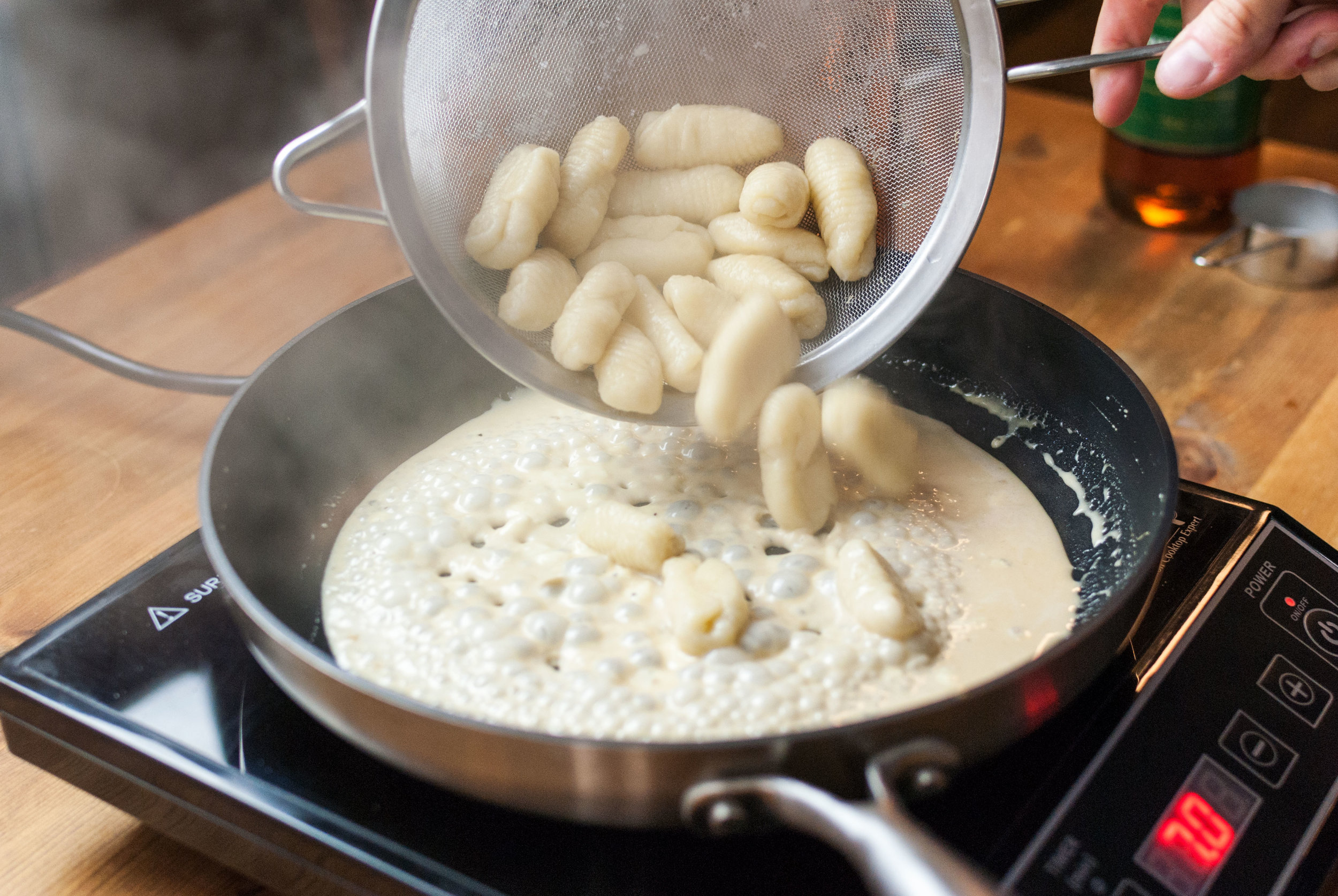 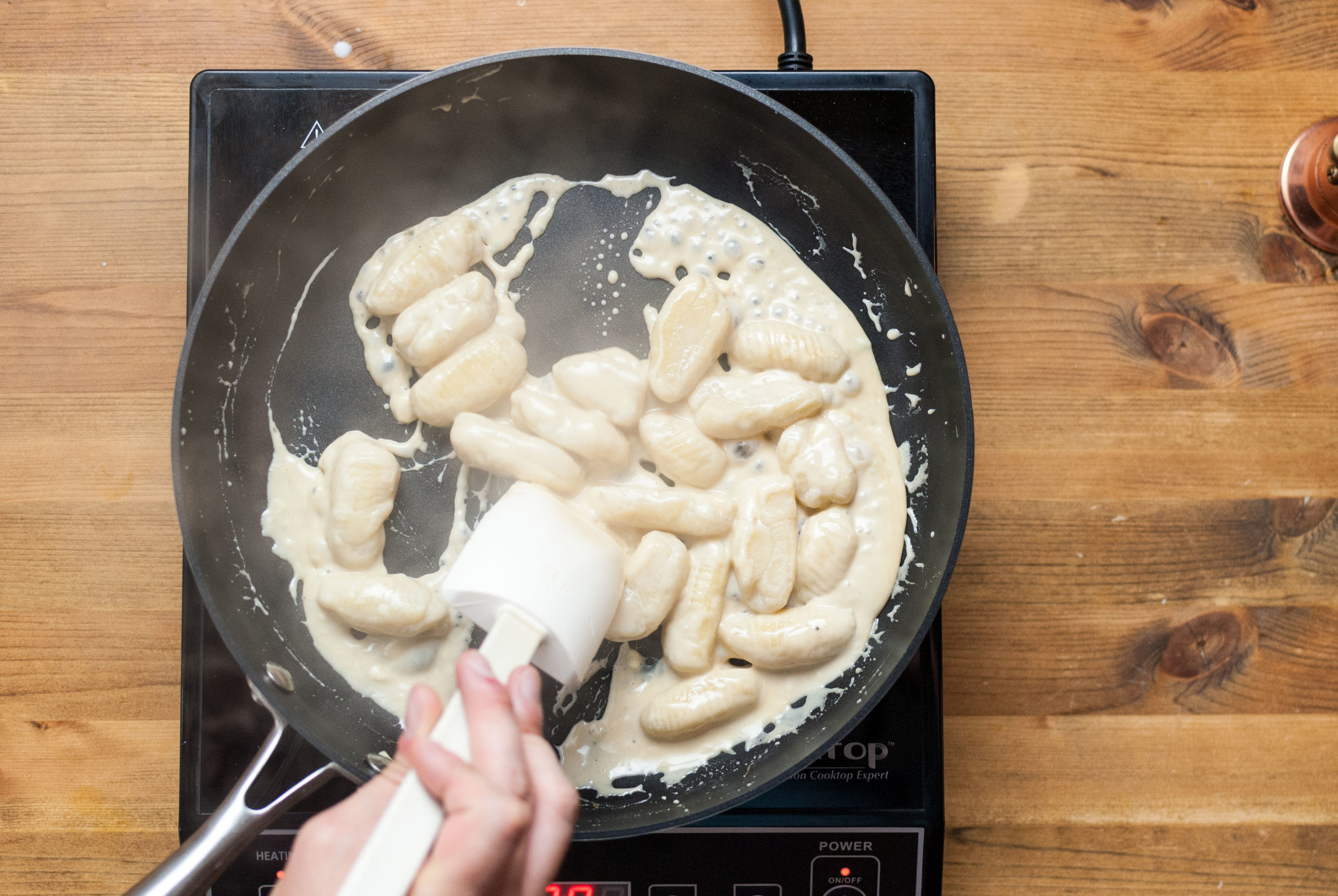 The sauce will reduce a little and darken slightly, and once the cheese is melted, give it a little taste to check for salt. It shouldn’t need much, if at all, since the cheese is salty on it’s own, but it’s good to check. Your gnocchi should be ready around this time. Fish them out of the boiling water with a slotted spoon and add them to your sauce. Depending on how much your sauce has reduced, you might want to add a little bit of gnocchi water or broth to lengthen out your sauce because the addition of all this starch is going to make your sauce seize up. Toss the gnocchi in the sauce and weigh in to see what it needs for your own desired texture. We like our sauce to cling to the gnocchi, but we also like to have some leftover sauce in the pan since it thickens as it cools. Plus, it’s nice to have a little extra sauce in your bowl to mop up while you’re eating. Once you’ve got your sauce where you want it, remove the skillet from the heat and grind some black pepper over your gnocchi. We are, ah, liberal with our pepper; we like the floral quality it adds to the dish, but you ought to make that call for yourself. Serve in a bowl with protein or just on it’s own; you’re done!